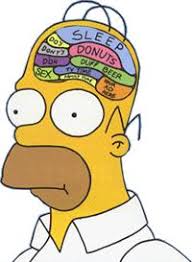 I just got done reading an extremely interesting book recently… Incognito: The Secret Lives of the Brain by Baylor University neuroscientist David Eagleman.  Eagleman’s hypothesis is that most of the activity going on in our brains is happening below the level of our consciousness, down in “burned in” subroutines which do most of the heavy cognitive lifting.  Our consciousness is the brain’s “summary” of what is going on both out in the world and inside our heads – the metaphor he uses is that of a newspaper.  While it is impossible to know all of the things going on the world around us, a newspaper gathers up a summary of information we need to know (at least according to the newspaper editors and their corporate masters).  Eagleman theorizes that consciousness is our own newspaper, constructed on a moment to moment basis by the incredible piece of gefilte fish in our heads and that without such a mechanism, we would be overwhelmed by information and sensation and unable to react to the world around us.

The interesting part of the book from a security point of view is Eagleman’s contention that free will is really an illusion and that the decisions we make are determined by organic processes and those “burned in” routines we are not even conscious of.  Neuroscientists have been making great strides in tying brain function to behavior in measurable ways, he says, and as the science gets better, we will be able to better see the connections between antisocial behavior and neural malfunctions.

This was a fascinating and thought provoking book and is well worth your time.  If you want to get a taste of what Eagleman has to say, The Atlantic has an excerpt from the book on their web site.

This is the personal blog of Al Berg.  By day, I am the Chief Information Security Officer of Tassat, helping secure our next generation, blockchain based B2B payments infrastructure.

When I am not securing something or other, I am an EMT with the Weehawken Volunteer First Aid Squad and maintain the Weehawken Time Machine,  which is a website full of Weehawken history.

Everything I post to this blog, Mastodon, LinkedIn, Instagram, and other public fora are my opinion and do not represent the position of my employer or anyone else.  If something here annoys you, it it strictly my fault.